We are well into week 2 in the Haliburton Highlands area (I am posting from the Haliburton Public Library). The first week saw the great views of the “super moon” we had in the area, followed by 5 straight days of rain. Dan, Joe and I were in a nice warm cottage, but Jack is at Camp Big Canoe and was sleeping in a tent the entire time.

The weather for this week looks great, and we are exploring the full area, including Minden and Haliburton. The cottage came with a canoe and a paddle boat. We all love the paddle boat, and it easily seats three!

It was wonderful seeing the boys again after their trip to Germany. They had a blast, and they were very well taken care of by Eno and the rest of their billet family in Germany. They even got to attend the last day of school with the kids in the family (Joe to elementary and Jack to the Gymnasium/high school). Sounds like the festival was wonderful for them, and we are thankful again that Original Kids Theatre is in London – they did an awesome job on this trip, and with our kids.

Joe took to the camera, coming home with more than 50 pictures. Jack, on the other hand, says that cameras “ruin the moment.” Here is a small view of the International Children’s Festival (and some of the Original Kids) through Joe’s eyes. 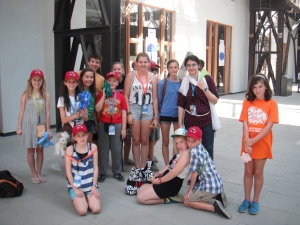 This week we are visiting with my sister Judy and her family. Yesterday was the (crowded but wonderful) Ripley’s Aquarium in Toronto, and tomorrow we head a little north for two days at Canada’s Wonderland. Saturday, it’s off to 2 weeks at the cottage for Joe, Dan and I while Jack heads off to 12 days at Camp Big Canoe. I am hoping for some semblance of summer weather while we are there!

Jack and Joe left for Germany with Original Kids last night. After a day filled with last minute thoughts, packing ideas, and advice for them both, I thought I was prepared. We took them out for a late lunch/dinner, a walk around the river and downtown, then met the group for a bus departure from Covent Garden to Toronto airport.

Both kids seemed excited and confident. Being with friends helped a lot, but I don’t think they would have been too worried either way! Lots of smiles and laughter, as OKTC staff handed out matching red hats to the cast (easier to keep track of everyone, and a brilliant idea) and small bags of Canadian merchandise to trade or give to new friends from around the world at the festival.

Rogers Television has been following the Dream Journey process from the beginning, and will be creating a series this fall for broadcast. In his final interaction, Joe already seems like a media pro.

It was surprisingly difficult to come home to the house without them. I travel away from them for work a fair bit, so I wasn’t really prepared for how different it would feel to be in our house without them. But it won’t be long before we pick them up in Toronto (Aug. 2), on the way to our next adventure!

We are less than two weeks away from the first part of the boys’ adventure. Jack and Joe are part of the Original Kids Theatre Company group that will represent Canada in the International Children’s Festival in Lingen Germany. So they leave London first, July 23.

On another front, this weekend we meet the man who is renting our house (with his family) for the year. He’s spending a year in Canada from Australia, so it will be nice to meet another adventurous family!

Lots of details still to take care of, such as five visas for each of us. But, we have had our immunizations, taken care of lots of details. Much more to come, but taking it one thing at a time.

Our family is embarking on a travel adventure this year. We are setting up a website so friends and family can read about our adventures, and see some photos and videos we take along the way. The website business is new to us, but we will learn and get better, I am sure.

June's chronicle of Semester at Sea 2022