It has been an eventful 2015 so far. The cab collected us January 1 at 4:30 am, so no New Year partying for us. We looked more than a little like The Beverley Hillbillies at the airport. We wanted to protect our large backpacks that we will need later in Europe, so to make sure the straps didn’t get damaged in transit we dropped them into dry-cleaning bags that Dan then duct-taped shut. Very effective, but hilarious looking. We know we are going to get rid of our suitcases at the end of the ship voyage too, so we chose old, broken-down cases. Add to that a total of 8 carry-on bags, and we looked like vagabond homesteaders at the airport!

We had a very smooth trip to San Diego (thanks Southwest); almost too good to believe. No wait at the bridge in Detroit, friendly laughing border guard, and both flights were early.

We have had a good couple of days in San Diego. It’s cold for the locals, in the mid sixties F, but nice and sunny and warm for us. Our hotel is midway between the water and Balboa Park (where the museums and the zoo are located) so it is a great location. While I did some last minute work in the hotel, Dan took the boys to visit both the Maritime Museum and the Midway aircraft carrier – they had a blast. Yesterday the whole family went to San Diego Zoo (some adorable animals we saw are included here). We arrived even before it opened, and the morning was wonderful, with no crowds and lots to see. As the afternoon got more crowded, we wrapped it up and walked back to the hotel through Balboa Park, which has gorgeous buildings and beautiful gardens. And Joe enjoyed seeing perhaps the largest and most crowded dog park in the world!

Last full day today (Sunday) before we board the ship tomorrow. A little last minute shopping, relaxing, and maybe a swim in the hotel pool later.

Not sure when the next blog will be – but next stop: Hawaii! 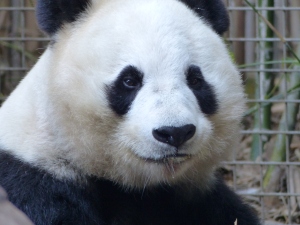 June's take on Consumption and Marketing